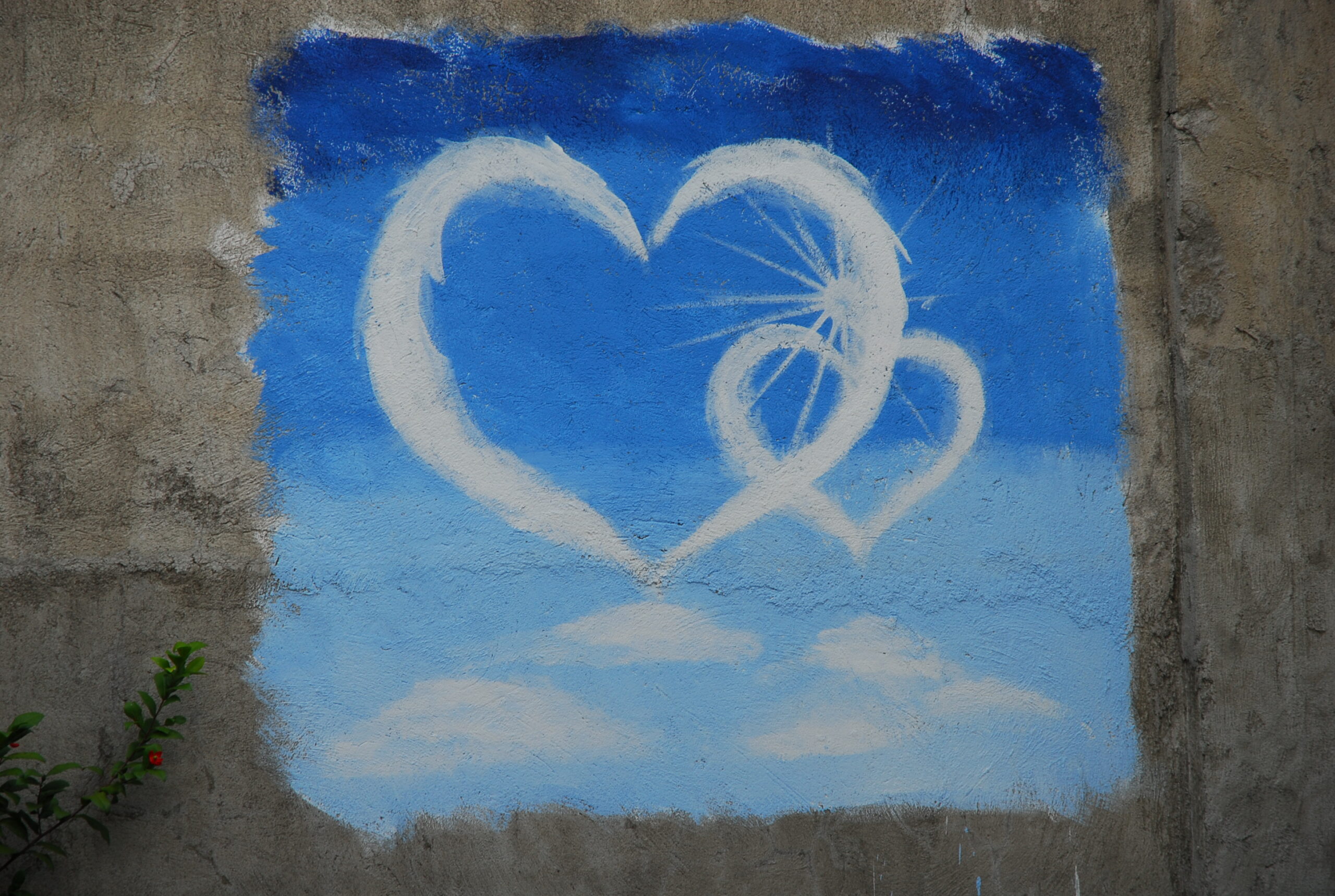 A grand and beautiful wedding is every woman’s dream, and so it was also for me. My husband and I planned a Grand Viking + Island Princess wedding in Samal two years ago, but a tragic event in the family forced us to delay and change our plans. The grand wedding became not so important any longer and we decided to do it at home on my birthday just with the family and a few friends. A home wedding is unusual, and after several approaches regarding it, I have decided to share my experiences.

The challenge was how to make the house into a reception area, a church, a restaurant, and a karaoke bar and make the changes go smooth. My husband had worked with both theater and movies so he easily got an idea of how to do it, but he could not do it alone. He asked if I had good party planner friends preferably with a background in theater and film, and of course, I had. LOL.  My long-time friends at Ricarlo Decora would be perfect.  They immediately said yes, we presented our idea and a small budget and they agreed to make miracles with small resources. And they did a great job together with other friends from Villa Viva Belgica namely Jonalyn and Valerie who assisted my husband in the kitchen. Also with them were Danica and Rose who helped with the table settings. Yes, my husband was cooking at his own wedding while I was doing the makeup in the bedroom with the professional assistance of another friend, Jane. 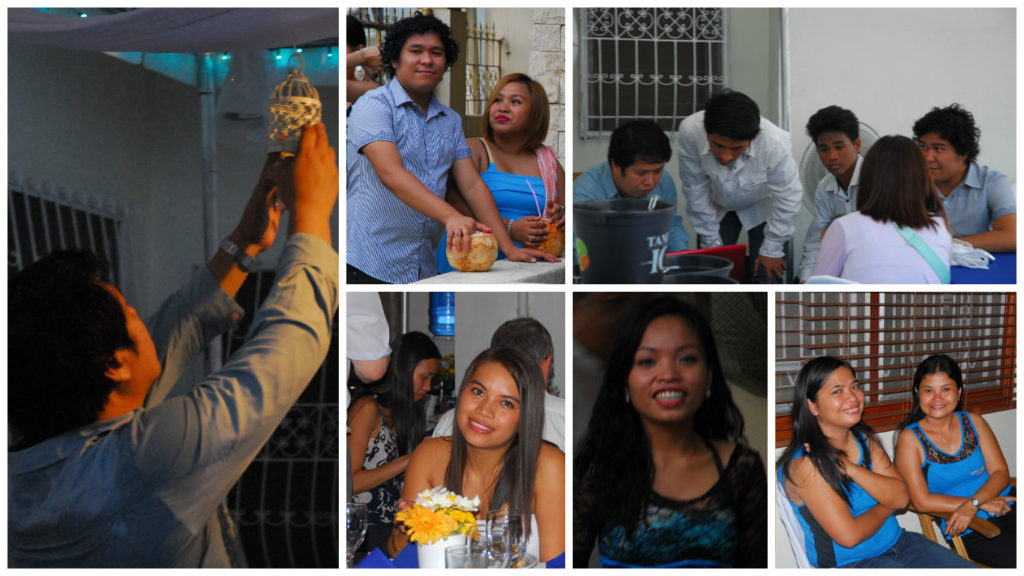 And all worked out fine until the Judge called and said that he would be delayed. We improvised fast and asked the man who first introduced me to my husband, Sir Ric, to be a stand in for the Judge. He called the Judge, got the permission and said yes to do it. The only thing for the Judge to do when he arrived was to perform the end of the ceremony included the signing of the papers. With that solved, we could keep to our plan. 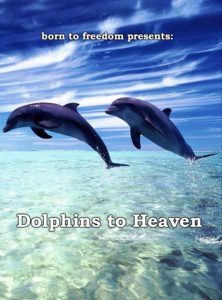 When the guests entered, they first saw a movie poster with two jumping dolphins titled: Dolphins to Heaven, and then entered the gate to the tunes of Harry Belafonte´s “Coconut Woman.” Our neighbor Edwin served fresh coconuts from a small stall decorated the Caribbean way. 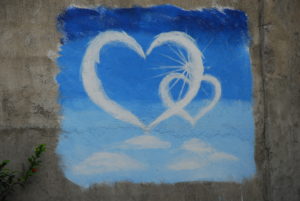 The guest continued through a small alley arranged to look like a church to the garden in the backyard where a painter hired by my friends had made a large painting of two big jumping dolphins on one of the walls, and a smaller one with two cloud hearts on the fence. 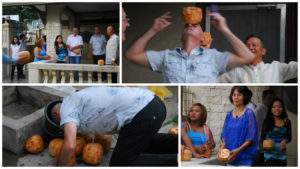 By the way, the guests were strictly ordered not to bring gifts so there was no need for a gift table, LOL. On the terrace, there were tables with snacks where the guests sat down with their coconut or other refreshing drinks while waiting for the ceremony to start.  After the refreshing coconut drinks, my event planner friends arranged a coconut throwing contest in front of the house with a chocolate box for the winner who happened to be my Mama haha. 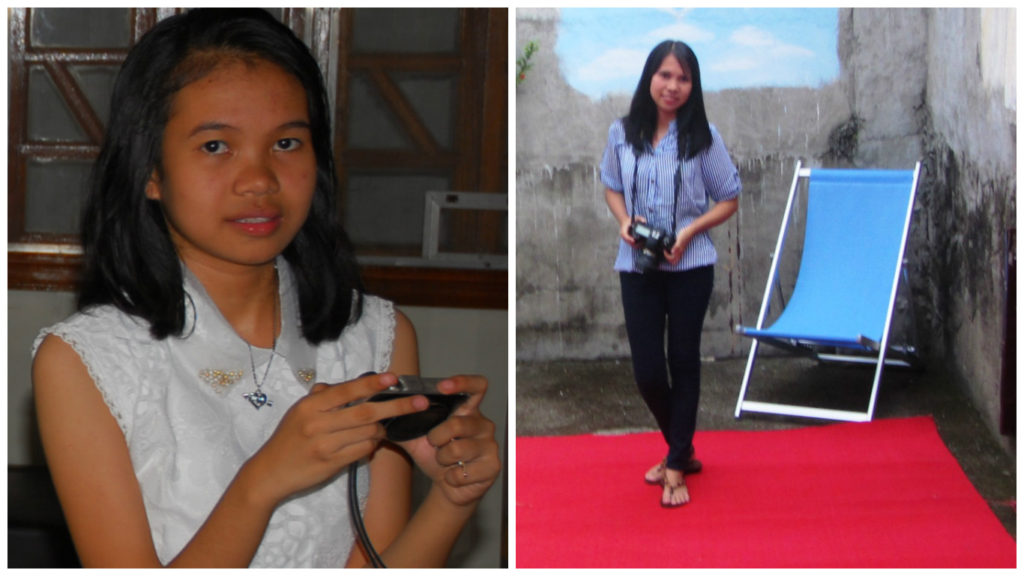 Soon as I finished my make-up, my husband handed the kitchen over to the Villa Viva team who prepared a tasty buffet with our favorite dishes, and with all the invited guests present, we started the ceremony with Sir Ric as a stand-in for the Judge. Eldar refused to hire a professional photographer and instead appointed my two sisters, Monmon and May to be the official wedding photographers.

My husband waited for me under the two hearts painted at the end of the garden with a nice bouquet of red roses.  My mama walked me down to him while the music played “Born for You” and he gave me the roses and then we walked back together to the tune of “Destiny”. And under the painting of the jumping dolphins, my two sisters read a poem together written for the occasion, and after that, my husband also read a poem he had written: 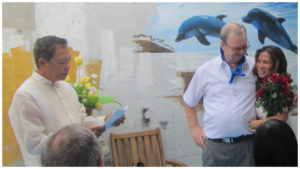 The wedding ritual began with Sir Ric as a stand-in for the Judge. He did it very slowly so that the delayed Judge could make it in time for the signing. We decided to take a break. We played Speedy Gonzales and started to eat Rock n Roll chicken with roast potatoes, lechon, and bratwurst with red cabbage mixed with apples, tuna, and pineapple salad, glass noodles with shrimp, etc… 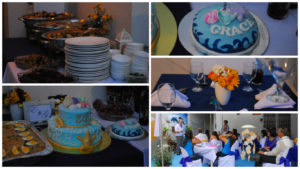 It became dark and still no Judge, but there was plenty of food and drinks so the guests had a great time. When the man with the coat finally arrived with his court of security guards and a wedding photographer (who was dismissed when he started to take pictures without permission from the official wedding photographers), all of us were more than ready to finish the ceremony. It had been no good to do it under the karaoke session, so I’m happy that he only was three hours late. 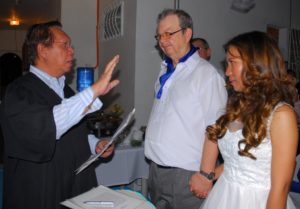 The Judge performed with great routine; it was his third wedding that evening and he was hungry. The Judge started to eat once he was finished and did not wait for my husband’s last little poem for me, so my husband blurted out loud: Wow, this was a very hungry Judge.  I became embarrassed. I felt that my husband insulted the Judge and I almost cried. But my husband took my sign and he served the Judge a chocolate mousse and it ended well over shared desserts LOL.

It was nice to hear that our guests talked to others about how enjoyable and unconventional our wedding was. It wasn´t very formal, but it was exciting. They enjoyed our fun games, home-made foods, and the nice decorations done by friends who care, at Visual Creations. Our wedding was not the grandest, but family and some friends were there to celebrate one of the special moments of my life. That was definitely enough bliss in a day for me, and my loving husband highlighted the event with a great surprise gift and a honeymoon trip abroad. 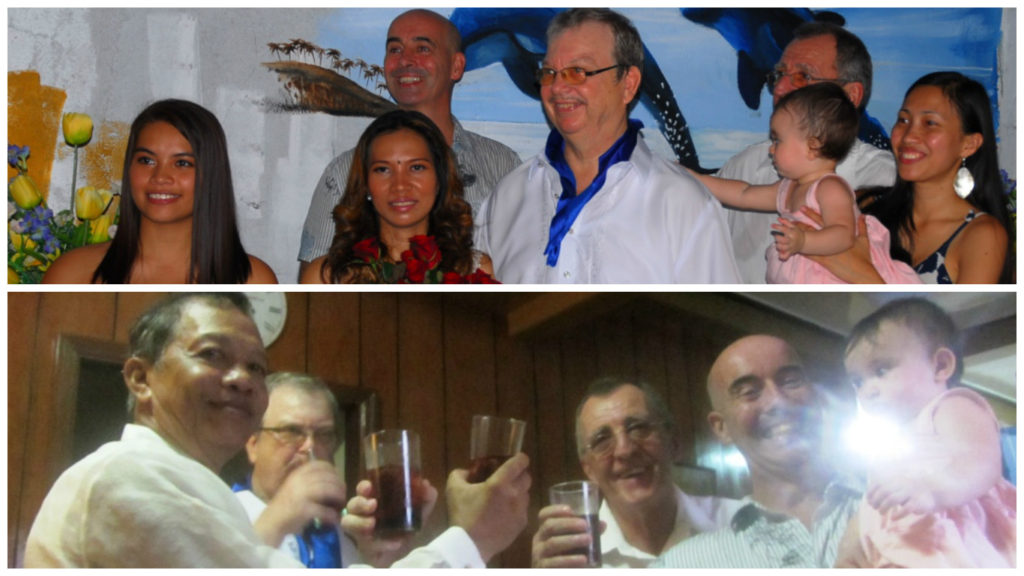 Villa Viva Belgica: A Small Oasis of a Guesthouse in Davao

The Hidden Voices of Alcoholism

3 Replies to “My Unusual Wedding”