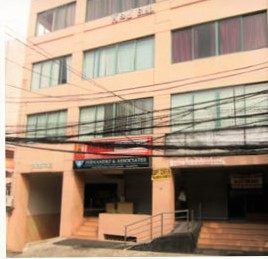 Here is part two of this post.  It is about the rule implemented in order to protect Filipinos from human trafficking, but it is also a story about how our bureaucracy makes good intentions into a stressful affair.  All Filipinos in relationships with foreigners need a certificate to be allowed to leave the country. And you can only get it in Manila or Cebu.  The initiative is good, but I have a little question mark regarding the process.

In my case, it started with the incompetence that is so typical for officials here in The Philippines.  My schedule was changed on short notice due to a Cebu City celebration. Air tickets and hotels were already booked but my hubby calmed me down and explained, “Remember my love, we are in the Philippines. Let’s make the best out of the situation and explore Cebu a little while we are waiting for your seminar.”

After three nights in Cebu, I finally could enter the seminar venue. I arrived early as advised.  I logged my name at the guard on the ground floor then went to the 2nd floor to photocopy my IDs because I read on one of the wall posters that the CFO will not accept any unclear copy of the documents. My printer at home was just having some trouble prior to the trip.

I proceeded to the 4th floor, there were already many people present and an officer checked my papers.  He forwarded them to a teller inside a booth and I just waited for my name to be called.  I was given a form, directed to another room, and filled it in.

I observed some worrying situations: a husband or maybe a boyfriend had to assist a young woman because she did not know his full name, and one woman did not know the complete maiden name of the husband’s mother. I understood that the process could be a little shaky if your knowledge of your spouse and his family background is weak.

I went back to the teller and gave my completed form. A man at the end of the teller´s booth called me, checked my documents, made some notes on them, and asked some questions. After paying P400, I was told to keep my receipt and be back at 1 pm.

I went back a little early, presented my receipt to the same officer at the entry and he wanted to know my country of destination. America and Canada are grouped together and Europe and the Asia Pacific made another group. We were ushered to our rooms and got video information about human trafficking, victims’ stories, organizations working together to combat it including tips and warnings on helping Filipinas to stop the traffickers from perpetuating. It was very valuable information and so far so good.

We were still waiting for the counselor even if it was already 2 pm. The videos were finished but all had to be replayed because the counselor was not there yet at the designated time. After 45 minutes, she arrived and was sharing experiences of Filipinas abroad; some scary, some funny. The idea of the seminar is to prepare for the worst, to be very vigilant, have enough money upon travel (also for a fast return), and to read every document well before signing. There was also information on what documents to carry when emigrating as well as airport procedures, baggage, technicalities, what to expect, etc… There were also visa topics and other inputs.

After the seminar, we were interviewed one by one. It took a lot of time and my interview took place almost last.  It went fine until I was asked about my husband’s divorce year. I wasn’t sure so she said I should know it since I didn’t have the divorce papers with me. But I had my husband’s document on no legal impediment to marry where his divorce was stipulated, and that should be more than enough, but the counselor still wanted to know it from me before she gave my certificate.

Another thing she asked for was the address of my husband’s son in Norway. It felt like a cross-examination based on impulse, not on facts. I texted my husband, got the info I needed and my certificate was released. It was nerve-wracking because if I wasn’t able to provide it on that day, I would have to go back the next day to prove something that was delivered in my husband’s document on no legal impediment to marry. 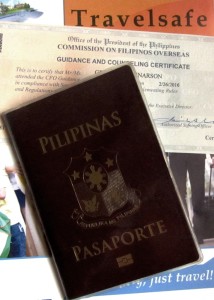 Even if I got my certificate on that day, I didn’t feel 100% jubilant. It was maybe because I pitied a girl who had difficulties and was not able to get hers. Others didn’t bring the additional docs needed thinking that the ones directly posted on the CFO website were the only ones required. However, there was a note on the site that there could be other documents that the counselor will require without mentioning specifically. I was also puzzled why the passport copy of my husband wasn’t indicated on the site when in fact the counselor said those were mandatory. Just imagine how much trouble it would cost mentally, emotionally, and financially for these women. Most came from far places and the unexpected turn of events might strain their budget, schedule, or physical conditions.

I am not critical about the role of CFO in helping Filipinos abroad. But I wish that applicants will be helped and guided and not accepted or dismissed based also on personal vibes. The certificate is a less-known but very important travel document. However, it shouldn´t create stress and tears due to lousy administration. It would help a lot to provide crystal-clear information and more human insight because going to Cebu or Manila is not just a jeepney ride to the nearest City Hall.

Getting my CFO Guidance and Counseling Certificate – Part 1 of 2

Two Trips to the Police Station in Motril

In Panglao: When Paradise Turns Filipino

Claiming my Visa and Getting my CFO Sticker in Manila