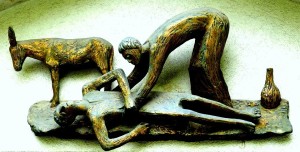 There is a worldwide reaction regarding Manny Pacquiao´s statement about same-sex marriage. He has lost international credibility and one of his largest sponsors doesn’t want to cooperate with him any longer.  Here in the Philippines, the newsfeeds are burning and the issue is dividing the nation. As a Christian worried about our common future, I have a duty to share my opinion.

I was brought up Catholic with a strong faith. I am not a bible expert but I have read the Bible from start to finish. I know the teachings of God and it includes being righteous and adhering to the Word of Mercy whatever happens because it is our Salvation. I should be as steady as my faith and try to understand the deeper meaning of being a Christian.

Same-sex marriage was never on the agenda as I grew up. I abhorred homosexuality and didn’t make friends with the LGBTs. My thinking was that their sexual preference and the activities associated with it is an abomination in the eyes of God and they would be burned in hell.

However, emotional and spiritual growth plus deep reflection about the meaning of Jesus´ appearance on earth opened my eyes and I do see now the importance of tolerance and mercy.  Pacman has of course his democratic right to express his views and I’m doing the same now because his controversial statement is building walls, not bridges in a nation that desperately needs to be modernized and reformed.

I understand Manny´s clarification coming from a very religious background but it shows he is not so sensitive about the issue. I hear someone who is overzealous about his views, but not mindful of the responsibility that goes with it. That might be in the bible, but the law of nature he refers to shows otherwise.

Many studies done on animals´ sexuality show that there are several ones that exhibit homosexuality as the most natural thing in the world. They probably know how to distinguish between genders, but still, their natural instincts lead them to their similar sex, and “they do what a man has to do” ( to quote a male friend of mine.) In other words, the animals do not act so much better than humans, or what do you think Manny? Check out, for example, the penguins 🙂

I think this particular add on was what mainly sparked the ire of the LGBT community. It implied classifying their preference as lower than animals. Maybe Manny really feels that, but for those who are born with different sexuality, it must hurt, and for some very hard.

Marriage is a ceremony to unite two people. They engage in it because they want to honor their relationship and are proud to seal a lifetime commitment. I don’t see anything wrong with doing it between the same sexes. Pacman is referring to an older version of a punishing God used by The Church to conserve what they believe is right. But the version Pope Francis is praying to is a Merciful One, and I also believe in that version of Him.

I consider Manny to be a great fighter and I have always admired him, but our nation also needs bridge-builders.  When it comes to politics; maturity stands a much better chance than immaturity, so I’m glad for Duterte’s decision to run for President. He says about same-sex marriage, “Everyone has a right to a little happiness.” Duterte includes all in his project of making our country into a safe and prosperous nation. That should be our goal now and we need no more dividers.  To say it as Pope Francis addressed Donald Trump recently: “A person who thinks only about building walls, wherever they may be, and not building bridges, is not Christian.”

Soulmates and the Hard Work of Marriage

The Hummingbird and the Crab

4 Replies to “Pacman, Same-Sex Marriage and a Divided Nation”