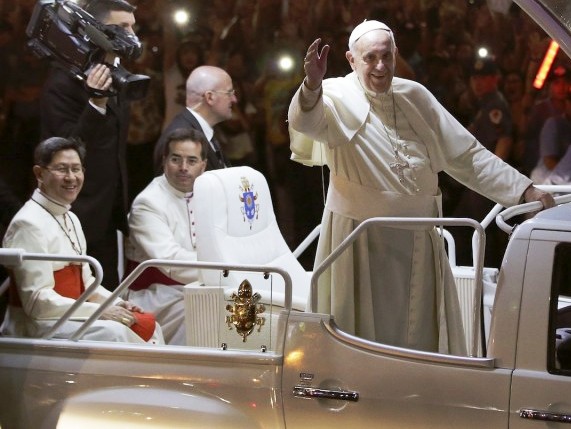 I have just seen a video of Pope Francis on his way to the Apostolic Nunciature in Manila and I was touched deep in my heart. The visit is indeed a very significant event for all of us. It is a symbol of hope and a celebration of Filipino resilience. The act also emphasizes the Pope’s mission to bring the Church closer to the people by understanding our deepest needs and our responsibilities towards each other.

Pope Francis’ mission is to strengthen the unity, not only among Catholics and Christians but also other religions. It is a message to embrace the God of mercy, not the God who condemns and sentences you to hell if you don’t follow orders. Building bridges of understanding and cooperation is possible. And as the Pope states; we must move forward towards greater understanding.

When I grew up, the Church taught me righteousness and I became a strong and uncompromising defender of the faith. I loved to be a part of “the moral police” following the examples of elders and was applauded every time I let my indignation hurt the poor ones who were not able to act correctly according to the bible. But my role models were pious in the eyes of the public, but troublemakers in private. There was pure anger when one commits a mistake, rather than understanding. “Walk the talk” was hard to implement, and scandals among the clergy started to unsettle my righteous lack of tolerance and understanding.

I do not feel comfortable worshipping in well-renovated church buildings with air conditioning while the starving poor outside is prohibited from going in because of filthy clothes. I find it ironic. I like the idea of having a progressive Pope because my own devotion to the Church has led me to seek the truth in the light of the New Testament. I have a desire to seek more instead of being satisfied with what the Church has taught me. I’m longing for a Church that is practicing the guidelines of Pope Francis, but it will not come easy.

Today, I saw the head of my Church arrived in my country as a symbol of compassion and mercy.  He tells the judgmental, corrupt, and intolerant to open up their hearts for the concept of forgiveness and compassion. He uses social media, reminds his flock of their vocation, and says sorry for their wrongdoings. He investigates problems in his headquarters, involves himself in the issues of pollution, world peace, and reconciliation. He lives a simple life and reaches out to the poor. His papacy is filled with the spirit of compassion, not with the mission to root out sin. He sees the world in the light of the New Testament and that gives hope to all of us who belong to the Old Catholic Church.

The Poverty Around Us

Science is Closer to Proving the Existence of God than ever. But does it really matter?