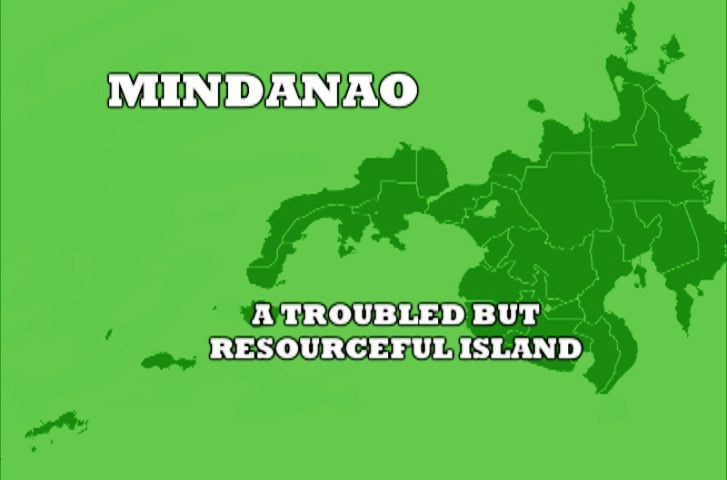 Mindanao measures 471 kilometers from the North to the South and 521 kilometers from East to the West and is often referred to as “the food basket of the Philippines”. With a massive expanse of undeveloped fertile land, it is considered to be the country’s “pioneer frontier”.

We grow rice, corn, bananas, mangoes, pineapples, abaca, coconuts, coffee, cacao, and others. Fiber plants are popularly cultivated such as cotton and rami. The timber and mining industry is also very important. Mindanao is a major agro-industrial and manufacturing center in Asia with a large potential. It is also home to active volcanoes and mountains. The highest peak is Mt. Apo at 9,691 feet or 2,954 meters. The climate is tropical with no particularly wet or dry season.  Rain is spread generously through the year and the floras and faunas are great refuge and sanctuaries for rare animals and birds.

We are mostly Catholic and our second largest population is Muslims.  Islam was the first foreign religion that took hold here, and due to conflicts and injustice since the Spanish conquistadores arrived, there are still fighting going on.  It’s not so much about religion, but a conflict based on injustice, ignorance, and lack of opportunities for the Muslim population who often live in extreme poverty.  This also goes for the small communist guerillas that are still under arms to fight for the less privileged.   There are also various tribes and ethnic groups living peacefully together with the Christians and the Muslims and all groups here are longing for peace.  We are closer to that than ever. An ongoing peace process is slowly giving results and our fantastic island is becoming safer every day.

It’s not dangerous to visit Mindanao as long as you are very careful in the most troubled areas. Most places are safe.  If you are just visiting or planning to invest here; you will become part of our growth towards a more just and prosperous society, and you are warmly welcome.

Mindanao is Waiting for your Business Initiative

A Samal Island Property with an Old Volkswagen Twist

Last Photos from an Amazing Island with 1000 Volcanoes

The Shadow of an Eagle